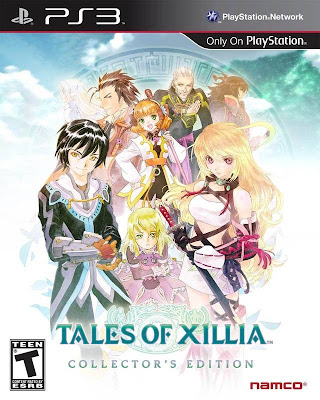 As expected by the Tales series, Tales of Xillia is a breath of fresh air!

I recently got my hands on a Pre-order limited edition copy of Tales of Xillia.  Having played few hours of the game I will be splitting this into various sections.  For now I will concentrate on first impressions.

Tales of Xillia features 2 playable characters, Jude a medic male student current working at a medical facility and Milla a mysterious female lead who we learn about as the game progresses. Each character has their own unique background and unique story arc.

When you first boot up the game you will not be seeing the usual Tales intro FMV.  You will be greeted with the choice of choosing which character to play as.  I chose to play as Jude.

After getting into the game and seeing a couple of cutscenes the main title finally appears and then we are able to see the trademark Tales intro with its great music track.

The game looks and feels a lot like previous Tales games. If anything it is very close to Tales of Graces F which was also released on the PS3.

When you get full control of your character the first thing you will notice is that this time we are able to fully rotate the camera 360 degrees around our characters.  In previous tales games the camera was usually fixed to one angle and we were only able to move to certain areas. In this game we are going to be able to enjoy each area with the ability to see all angles.

The in-game cutscenes are very beautiful. The sceneries are also very nice with each area showing that the creators took their time to put their unique touches to the surroundings.

The only flaw we come across from the start are the character models and some of the in game graphics. At times they can feel as if they belong on the PS2 or have been upscalled from the PS2.  With that factor put aside the game itself is pretty much what we would expect from a fully fledged RPG game. With shops, lots of NPCs to interact with, voices during the skits and a great cast of interesting characters this game will keep anyone hooked to this RPG.

The primary focus in this game is Spirit energy, which seems to be a big part of all the people's lives even the normal towns people. In the beginning we are not told too much about it only that is very important and later on we can expect some friction caused because of misusing spirit energy.

Stay tuned for an update when I have played more of the game and story. I will then also talk about the combat, levelling system and other details relating to actual gameplay.
First Impressions PS3 Reviews RPG